HOW CAN I MAKE A LOVE POTION?

Have you ever wondered how to make a love potion? When you were younger, did you hear stories about magical elixirs that could make a guy fall hard? If such a potion existed, would you even use it?

For centuries, rumors have swirled about the existence of love potions. The ancient druids were said to have perfected an elixir so powerful that one drop would make even the coldest of hearts run hot with passion.

But sometime just before the middle ages, the druid concoction became lost. It may have popped up during the 12th century, as recorded in an ancient text. But just as fast as it appeared, it suddenly vanished.

Here at MV, we’ve scoured the ancient scrolls and the modern day Internet to unearth what was.

To help us make sure we’ve gotten the ingredients right, we even spoke with a Wiccan expert who in the not too distant past told us all about casting love spells.

The love potion you will read about below is designed for the hearts of  both genders. This is not to say it will work on everyone. Rather, we’re simply suggesting, based on the literature, that the potion can be used for women or men.

You’ll notice that all of the ingredients in this elixir contain only natural elements. In other words, no “alcohol” is called for or any other mood altering additives.

That’s because love potions, in their purest form, must come from positive Karmic energy, which is infused through an intention. [We’ll get to the intention part soon.]

For now, here’s what you’ll need: 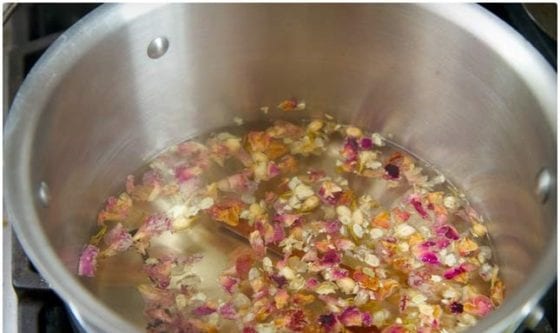 Take your cup and a half of water and pour into the pot. If you use more water than is called for by the ingredients, you run the risk of diluting the potion and its effects.

Once water is added, sprinkle in three teaspoons of dried rose pedals into the pot.

Now take the wooden spoon and stir the pedals. FYI: Our wiccan consultant made it very clear anything other than wood (like a metal spoon) is contraindicated. We don’t know why – that’s what she said.

Once the rose medals are all mixed in, pour one-fourth of the vanilla extract into your pot. Most standard wooden spoons hold approximately this amount so if you want to measure the liquid into the spoon directly, go for it.

Turn on the stovetop and set to low. Let the mixture heat up while stirring occasionally.

Do not bring to a boil yet.

Instead, allow the water and ingredients you've added thus far to simply get warm. This process should take about 5 minutes.

At the end of the warming period, you should be able to stick your finger in the pot/pan comfortably.

Now take the two tablespoons of dried yellow chrysanthemums and stir in. Crumble up one of your cinnamon sticks over the pot and allow to flake into the water.

Using the spoon, gently stir everything again. When you are done, turn up the heat to medium and allow to simmer. Your goal is for the liquid and ingredients to reach a slow boil. This should take 3-5 minutes (depending on stove).

While the potion is still hot, pour through a strainer into the drinking cup.

Use the other cinnamon stick and place into cup. Then, serve your man his drink. If you want to sample any “left over” potion, you can. It should taste like a gentle vanilla tea.

Results of this ancient love potion may vary from instant to several days. This elixir is best used during times of calmness and should not be reached for if there exists high relational friction.

One word of caution: Be careful what you wish for.

PS: The lore behind this love potion is that it will work on a person, regardless of sexual orientation. Let us know how it works out.

About Jean Bakula 12 Articles
Jean is a freelance writer and journalist based in New Jersey. She writes about relationships, self-care, and topics that touch on spirituality. Her work is featured on Hubpages. Click on the hyplink to follow her on --> Twitter
Website Twitter

Men's Variety Copyright 2021. G-Digital. All Rights Reserved. Sign up for our newsletter